Browns general manager Ray Farmer has made some good decisions this season on acquiring talent, but when it mattered most, the first round of the draft, he dropped the ball big time!

Knowing he had a wide receiver who was going to be suspended for maybe the entire year and in a receiver rich draft, he bypassed highly rated wide outs for a cornerback and a quarterback that will make us all wonder about his grading system when the 2015 NFL draft comes around.

Who would have helped the Browns more this year and in the future, the two players Farmer selected in the first round in Justin Gilbert and Johnny Manziel, or any one of these four wide receivers Sammy Watkins, Odell Beckham Jr., Mike Evans or Kelvin Benjamin? 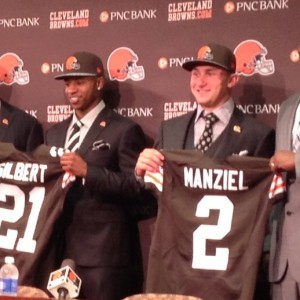 Plus there is one more game to play which gives all four wide receivers the opportunity to go over 1,000 yards receiving in their rookie year.

Ask yourself, who would have helped the Browns more this year and beyond?