CLEVELAND, OH – Cleveland Cavaliers General Manager David Griffin announced today that David Blatt has been released from his duties as head coach. Associate Head Coach Tyronn Lue has been named Head Coach. The current Cavaliers assistant coaches and staff remain under contract and will continue working with the team.

“On behalf of the organization, I would like to thank David Blatt for his efforts and commitment to this franchise,” said Griffin. “He spent the last year and a half battling intense scrutiny, working to mold a very willful group and we all recognize that is not at all an easy task.”

“But with that said, when you have the clarity of purpose that our ownership has instilled in this entire organization, decisions often make themselves. Every decision made is an answer to the following question: does it put us in the best position to deliver Championships to Northeast, Ohio.”

“So, today, we are elevating Tyronn Lue, from his role as Associate Head Coach to Head Coach. I am more than confident that he will have the pulse of our team and the buy-in required to enhance the habits and culture that will foster the kind of identity and results we must have.”

Blatt was named the 19th head coach in  Cavaliers history on June 20, 2014. During his one and half seasons as head coach, Blatt compiled a regular season record of 83-40 and a 14-6 mark in last year’s playoffs.

“Over the course of my business career I have learned that sometimes the hardest thing to do is also the right thing to do,” said Dan Gilbert, Majority Owner of the Cavaliers. “Our ownership group supports David Griffin’s decision.  We would like to thank David Blatt for his work over these past two seasons where the Cavaliers transformed into a playoff team after a rebuilding phase.  We believe Tyronn Lue is the right coach at the right time to put us in the best position to take the last but most challenging step to complete our mission to deliver Cleveland an NBA Championship.”

Lue is in his second season with the Cavs after being hired as the associate head coach in June 2014. He was previously an assistant coach on Doc Rivers’ staff with the Los Angeles Clippers, who captured the Pacific Division title with a 57-25 record in 2013-14. Prior to the Clippers, Lue spent four seasons as a member of Rivers’ Boston Celtics staff, the last two as an assistant coach. He began his time in Boston as the Director of Basketball Development in 2009-10.

Originally drafted by the Denver Nuggets with the 23rd overall pick in the 1998 NBA Draft, Lue played 11 seasons in the NBA, appearing in 554 career games with the Lakers, Washington, Orlando, Houston, Atlanta, Dallas and Milwaukee. The former University of Nebraska star won NBA Championships in 2000 and 2001 with the Lakers.

In my opinion, Hue Jackson is the right choice from the the candidates interviewed by Jimmy Haslam and the Browns to be their next head coach and here’s why I believe that:

He has previous NFL head coaching experience with the Oakland Raiders in 2011.

He has experience as an NFL and college Offense Coordinator most recently with the Cincinnati Bengals, as well as the OC with the Raiders, Falcons and Redskins. In college he called plays for USC and Cal.

He has experience in many different NFL coaching roles with 5 different NFL teams (Redskins, Falcons, Ravens, Raiders and Bengals) during his 15 years in the National Football League.

He comes from the Cincinnati Bengals, a team in your division, so he already knows all three teams in the AFC North that you play twice a year and must beat to win the division.

He has experience in working with quarterbacks from being an OC and QB coach in the NFL, while also playing the quarterback position in college at Pacific.

He has experience working for a dysfunctional NFL franchise from when he was the head coach in 2011 with the Oakland Raiders. He guided them to an 8-8 record, still their best record in the last 5 years.

He has playoff coaching experience as an assistant from throughout his NFL career.

You strengthen the Cleveland Browns with an experienced head coach and also at the same time, you weaken one of your rivals in the Cincinnati Bengals who won the division in 2015.

With his 15 years in the National Football League with 5 different teams and with different coaches, he should be able to put together a solid coaching staff.

Addition by subtraction! He’s not Mike Pettine, Rob Chudzinski or Pat Shurmur. The Browns actually got a head coach they wanted instead of having to settle for their third fourth or fifth choice.
#TurnAroundBrowns 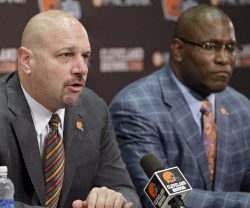 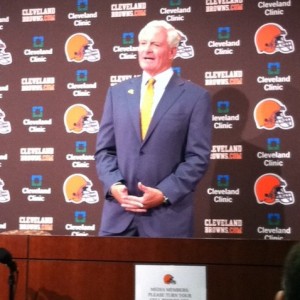