As I told talk show host Ken Carmen last night on 92.3 The Fan in Cleveland, I can’t figure out what’s taking so long for LeBron James to make this decision.  It’s a two horse race. It’s either Cleveland or Miami. What’s the holdup LeBron?  You played for both teams, so you know both organizations. You’re a student of the game, so you see the two rosters and understand their cap space availability. So make up your mind already!

It’s being reported that he wanted to talk it over some more with his family. From everything I hear from my sources, they all want him to come back to Cleveland. So what is causing the holdup?

Here are a few reasons, and I know I may be reaching here, but what they heck we have time to kill, as to why maybe LeBron is still undecided, if he really is. 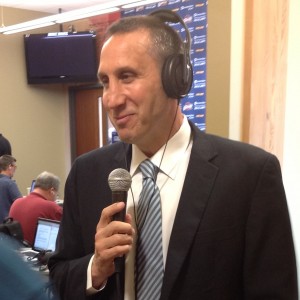 1. Since he’s in Vegas for his skills camp and if he doesn’t know too much about new Cavs head coach David Blatt, might LeBron want to check Blatt out in person on Friday as he coaches the Cavs summer league team in their first game against Milwaukee?

2. Maybe LeBron wants to see Cavs number #1 pick Andrew Wiggins in action going up against the player the Cavaliers passed on in Jabari Parker since the Bucks and Cavs are playing each other to see if he feels new Cavaliers G.M. David Griffin made the right pick. 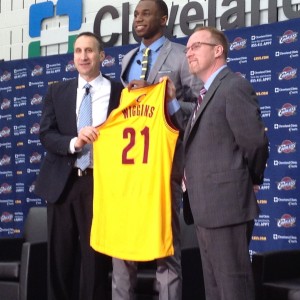 3. LeBron might also want to get a look at last year’s number #1 overall pick Anthony Bennett to gauge how much he’s improved from his disastrous rookie season, to see if he thinks the kid can play in the NBA.

4. Or “King James” could be waiting on the Cavaliers to swing a deal for Kevin Love, to prove to him that this new regime could follow through on the possible plans they laid out to his agent Rich Paul when the two sides met recently.

5. Is it possible, I guess anything is at this point, that James gave Pat Riley and the Miami Heat once last chance to pull off a major move like maybe bringing Carmelo Anthony to Miami to play with LeBron and D-Wade?

6. How about this one, Nike and the Cavaliers needed more time once they found out where LeBron is going, to get all their TV ads, billboards and other advertising avenues together so they can flood the media market with their new LeBron marketing campaign? And also, maybe LeBron and his team needed more time to get their website ready for the traffic that will be coming their way for when they do make the announcement on his site?

I have no idea if any of these are indeed reasons why LeBron has yet to announce his intentions, but for some reason he hasn’t made the “Decision” public yet, so these were my best guesses.  You got anything better?