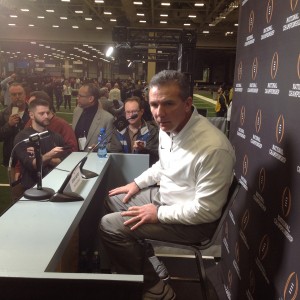 COLUMBUS, Ohio – Tony Alford, who has coached collegiate running backs for 18 years and who is called an “exceptional” person and coach by Ohio State head coach Urban Meyer, was named assistant head coach for offense/running backs coach at Ohio State today by Meyer. Alford has been an assistant at Notre Dame the past six seasons.

“I’ve known Tony Alford for a long time and I am very pleased to be adding him to our staff,” Meyer said. “He is an exceptional person and coach who is going to work really well with our staff and who will be an outstanding mentor and teacher for this football program.”

Alford and Meyer’s relationship dates to Meyer’s first year as an assistant coach at Colorado State University in 1990. Alford was a senior running back on a team coached by Earle Bruce. Meyer was in his first year as a receivers coach for the Rams.

Alford has numerous coaching ties with a number of Ohio State coaches. He and offensive coordinator Ed Warinner and tight ends coach Tim Hinton were on the Notre Dame staff together in 2010 and 2011. He and Chris Ash spent five seasons together at Iowa State (2002-06), where they worked under Dan McCarney, a close friend of Meyer’s.

“I am excited for a number of reasons,” Alford said. “I am looking forward to working for Coach Meyer, someone I’ve known for a long time. I know his family. And I know his coaches. I’ve worked directly with three of them and I’ve recruited against all of them.

“Plus, the history of the Ohio State program speaks for itself. I am extremely humbled and flattered that I was the guy who Coach Meyer wanted. And for that, I feel deeply indebted to Notre Dame … to Brian Kelly, Jack Swarbrick and Father Jenkins, and to the many players who I was able to work with, build relationships with and know. They were all great to me.

“And now I look forward to the new challenges and experiences and growth opportunities at Ohio State, and I’m excited to start helping them win another championship.”

Alford, a finalist for 247Sports’ 2011 national recruiter of the year and also one of the top 25 recruiters in the nation that year by Rivals, was born in Akron and lived in Ohio for over 16 years before moving to Colorado Springs as a high school senior. His father, Robert, was a three-year letterman in football at Kent State and coached high school football in Ohio for 10 years. Thus, most of his 22 years in coaching has been in the Midwest and central United States, including his first two collegiate jobs at Mount Union, in 1995, and at Kent State the following season.

In 1997 Alford joined McCarney’s staff at Iowa State as running backs coach and spent the next four seasons in Ames developing running backs and helping the Cyclones to be one of only three Division I schools to produce a 1,000-yard rusher for six consecutive seasons between 1995-2001. The Cyclones improved their national rushing from rankings of 103rd to 17th in Alford’s four years and won their first-ever bowl game to cap a 9-3 season in 2000.

Following one season – 2001 – as running backs coach at Washington under Rick Neuheisel, Alford returned to Ames as McCarney’s assistant head coach and running backs coach, a position he held for the next five seasons. During this tenure with the Cyclones, Alford guided Stevie Hicks to a 1,000-yard rushing season, the fifth running back to do so under Alford’s tutelage.

When McCarney was let go following the 2006 season, Alford moved on to the University of Louisville where he spent two years as running backs coach under Steve Kragthorpe. In 2008, Cardinal running back Victor Anderson topped 1,000-yards rushing and was named the BIG EAST Conference rookie of the year and a freshman All-American.

In 2009 Alford joined Charlie Weiss’ staff at Notre Dame as running backs coach and the next season he was the only coach retained by new Irish coach Brian Kelly. Alford worked with Notre Dame’s wide receivers his first two seasons under Kelly and helped Michael Floyd to consecutive 1,000-yard receiving seasons and a subsequent first-round selection by the Arizona Cardinals in the 2012 NFL Draft.

Alford was a 1,000-yard rusher and a Doak Walker Award nominee while at Colorado State from 1987-90. He gained 1,035 yards in 1989 as a junior under first-year Rams coach Earle Bruce. He had an 80-yard run that year vs. Hawai’i and also set the conference record with 310 yards vs. Utah, a school mark that stood for 24 years. Alford was named first-team all-Western Athletic Conferernce that season and honorable mention All-America by USA Today. During Alford’s senior season Colorado State went 9-4 and went to its first bowl game in 42 years.

A 1992 graduate of Colorado State with a degree in exercise and sport science, Alford went on to play for the NFL’s Denver Broncos in preseason action and the Birmingham Fire of the World League prior to entering the coaching profession.

Alford and his wife, Trina, have three sons: Rylan, Kyler and Braydon.