IS THERE A FORMULA ON HOW TO BEAT OREGON?

The Oregon Ducks have lost only four games over the last three years with 2014 Heisman Trophy winning quarterback Marcus Mariota running the offense. 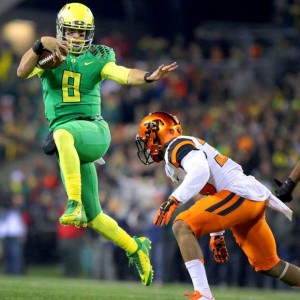 So I went back and looked at those four losses, two against Stanford and two against Arizona to see if there were common denominators in all four losses. Here’s what I came up with:

In all four losses Oregon was held to less than 10 points at halftime.

In all four losses Oregon turned the ball over at least once on offense and totaled 8 turnovers in those four games for an average of 2 turnovers per contest.

In all four losses Oregon’s opponent ran more offensive plays than the Ducks did. On average Oregon ran 11 fewer plays per game in the losses (83.5 to 72.2).

In all four losses Oregon’s opponent ran for 200 yards or more as a team and averaged 58 carries for 246.5 yards per game on the ground.

In all four losses Oregon only had a 32% conversion rate on 3rd down on offense.

And in three out of the four losses Oregon was outgained in total yards by an average of 24 yards per game.

So what should Ohio State take from this? 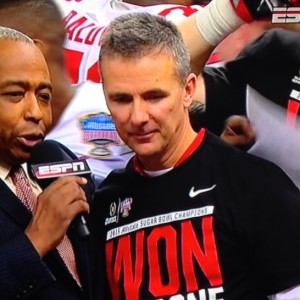 If I’m the Buckeyes I’m going back and watching all four losses to try and learn the recipe for success against Oregon from Stanford and Arizona. Then I’m  going to formulate part of my game plan on trying to run a ball control offense, an eat the clock offense with Ezekiel Elliott leading the way, but also using Jalin Marshall, Curtis Samuel, Cardale Jones and maybe Dontre Wilson if he’s healthy on the ground. By establishing the running game and chewing up time on the clock, it should in turn open up the passing game for quarterback Cardale Jones and receivers Devin Smith, Michael Thomas, Evan Spencer and more.

Putting pressure on Mariota was also a major factor in the four losses which helped lead to those 8 turnovers. Not just by sacking him, but forcing him to throw the ball before he wanted to. So that means the Buckeyes defensive line led by All American Joey Bosa, as well as Michael Bennett, Adolphus Washington and Steve Miller have to penetrate Oregon’s tough offensive line and get in Mariota’s face to hopefully sack him, at least hit him, or if not, force him to make early errant throws that could end up as interceptions. Also when Bosa or maybe linebacker Darron Lee get a chance, within the rules of the game, they need to hit Mariota as often as they can, as hard as they can, to make life miserable for him in all four quarters of the National Championship game. Just like the Buckeyes defense did to Miami’s Ken Dorsey in the 2002 National Championship contest.

That looks to be the formula on how to beat Marcus Mariota and the Oregon Ducks. Easier said than done of course, but the Buckeyes are a confident team and peaking at the right time, so let’s see if Urban Meyer’s troops can execute a game plan like that and if they do, they’ll have a good chance of winning the game and making history by being crowned National Champions in the first ever year of the College Football Playoff.

One Response to IS THERE A FORMULA ON HOW TO BEAT OREGON?