If Brian Hoyer couldn’t engineer a touchdown drive with the Browns first team offense against the Bears second team defense, there really would have been something to worry about. But that wasn’t the case.

Hoyer played one series and led the Browns first team “O” on a 13 play – 85 yard drive culminating with a Ben Tate 1 yard run in the first quarter. Hoyer was 6 of 8 throwing the ball for 69 yards in his best performance of this preseason. He was done after that drive, avoiding injury and leaving with some confidence. 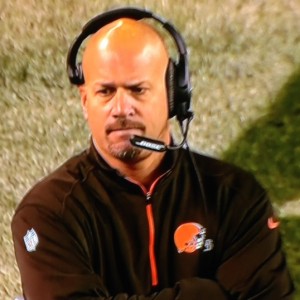 Browns head coach Mike Pettine liked what he saw on Hoyer’s touchdown drive, “He was sharp, made some good throws, made the right reads. It was good to see our guys make some plays down the field.”

Johnny Manziel also led the Browns offense on a touchdown drive in the second quarter. It was a 5 play- 80 yard drive, ending with a 1 yard TD pass from Manziel to tight end Jim Dray.

Manziel finished the first half 4 of 11 throwing the ball for 64 yards with the touchdown pass and no picks. “Johnny JamBoogie” also rushed for 30 yards on two carries.

Here’s what head coach Mike Pettine thought of Manziel’s first half performance, “Falls into the category of Johnny being Johnny. A couple of those plays were no, no, no, yes – but that’s what he does. That, to me, is what he brings to the table. He just needs to get more comfortable in his reads, take the easy throws that are there. He’s certainly shown why he has the reputation that he does.” 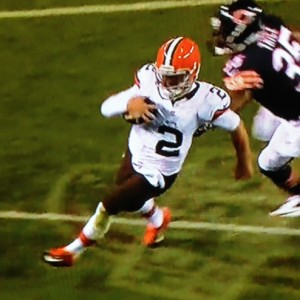 For the game Manziel, who was up and down throwing the football, completed 6 of 17 passes for 89 yards and the 1 touchdown strike. He was not intercepted and finished the game with 55 yards rushing.

So even if it was against the Bears second and third team defenses, it was good to see both quarterbacks put touchdowns on the board. Will that translate to TD’s against Pittsburgh’s first team defense in the regular season opener?

We’ll find out on September 7th at Heinz Field in Pittsburgh at 1pm, but none the less, some progress was made by the Browns offense, even if it was the Varsity against the JV’s.

The Browns ended up winning the game, their first of the preseason, 33-13 over the Bears.