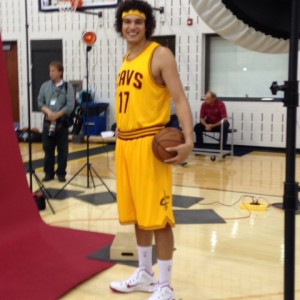 “Anderson represents how this franchise wants to approach the game of basketball, both on the court and off,” said Griffin. “He has been a key part of our foundation for years and we are very happy that he will continue to be part of our Cavs family as we work towards our goals at the highest level. Andy is, and has been, a tireless worker, an incredible teammate and a great competitor that plays with a rare combination of energy and intensity that makes him truly special.”

Varejao, who is in his 11th season, has spent his entire NBA career with the Cavaliers, appearing in 535 games (183 starts) with averages of 7.8 points on .512 shooting, 7.8 rebounds, 1.2 assists and 0.9 steals in 25.9 minutes. He has also appeared in a franchise-record tying 71 postseason games and was a key contributor to the team’s first ever trip to the NBA Finals in 2007.

Among franchise leaders, Varejao ranks third in offensive rebounds (1,401), fourth in total rebounds (4,177), fifth in defensive rebounds (2,776), eighth in steals (500), eighth in blocks (377), eighth in field goal percentage (.512) and ninth in games played (535). He is just one of only four players in Cavaliers history with at least 4,000 points and 4,000 rebounds, joining Zydrunas Ilgauskas, Brad Daugherty and John Williams.

Varejao has notched 88 double-doubles over his career and has pulled down at least 7.0 rebounds in seven straight seasons, including 9.0 rebounds in each of the past four campaigns.

One Response to CAVALIERS AND ANDERSON VAREJAO SIGN CONTRACT EXTENSION