ANDREW WIGGINS SIGNS WITH CAVS, BUT WILL HE STAY WITH CAVS?

The Cleveland Cavaliers made it official today, signing Andrew Wiggins, the first overall pick in the 2014 NBA Draft.

The 6’8, 200 pound swingman was chosen by Cavs G.M. David Griffin over Jabari Parker and his Jayhawhks teammate Joel Embiid. 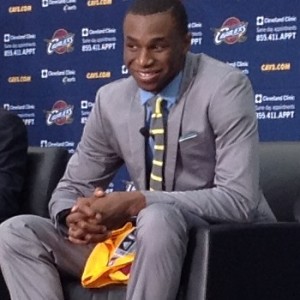 Wiggins left after his freshman year at Kansas where he averaged 17.1ppg and 5.9rpg. In 4 games for the Cavs in the Las Vegas Summer League, Wiggins averaged 15.5ppg.

By signing Wiggins today the Cavaliers are unable to trade the talented rookie for 30 days, as they continue to explore the possibility of dealing for Timberwolves power forward Kevin Love.

Minnesota part owner, president and head coach Flip Saunders has made it clear that if the Cavs want Love, Wiggins must be the centerpiece of the deal.

There have been varying reports on whether or not the Cavaliers are willing to part with Wiggins. If they do, his salary of $5.5 million for his rookie season will now count as part of the deal since he has officially signed his contract, but any trade involving Wiggins can’t officially happen now for 30 days. The Chicago Bulls and Golden State Warriors are also reportedly interested in trading for Kevin Love.

Per ESPN’s Brian Windhorst the Cavs have also signed 2nd round pick, shooting guard Joe Harris out of Virginia to a 3-year, $2.75 million dollar contract.