RAIDERS ROOKIE STARTING QB DEREK CARR ON JOHNNY MANZIEL, THE DRAFT AND STARTING IN THE NFL AS A ROOKIE 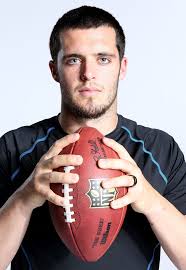 On if he knows QB Johnny Manziel and what he thinks he’ll do as a pro:

“In college, of course, he was on ESPN every day. We’d get to see all his highlights. I was a college kid. That’s what you do. You watch ESPN so I got to see him, got to see him play in all those games. I thought he was a great athlete – makes plays obviously when things break down. I’m no quarterbacks coach. I don’t know the exact things that I’m talking about, I guess, but I think he’s going to be a great player. I wish him nothing but the best. I got to talk to him, hang out with him a little bit at the combine. He’s a good dude. I have nothing but good things to say about him.”

On if he thinks it’s better for a rookie quarterback to learn in the game like he’s doing or learn on the sidelines like Manziel is doing:

On Head Coach Mike Pettine talking about him like he was a first-round pick and if he’s surprised where he was picked at:

“Going back to that day, I put everything I had out there. Obviously, certain teams didn’t think I was. It didn’t work out that way, but I can promise you I’m more than happy where I ended up because I’m home. I’m in a place where we’re building things the right way, and I’m happy just to be on the field playing. It’s a blessing to be in this league.”