In years past this was an easy pick as the Steelers defense dominated because of its linebackers in Dick Lebeau’s “Blitzburgh” scheme. The pressure Pittsburgh’s LB’s would put on opposing quarterbacks allowed Troy Polamalu to do whatever he wanted and Ike Taylor was able to cover the opposition’s top wide out.

That is not the case anymore.

The Steelers linebackers are average at best, and Polamalu and Taylor are older and slower. That is not a good combination for the “Black and Gold”.

How bad are the Steelers linebackers? They drafted one in the first round in Ryan Shazier, and he’s starting on the inside! Mike Tomlin doesn’t like to start rookies on defense, or anywhere. That should tell you something.  Last year’s first round pick, another linebacker in Jarvis Jones, underperformed based on the front office’s expectations and the other two starters, Jason Worilds and Lawrence Timmons have also been disappointments, even though Worilds led the team in sacks last year with 8. They are a downgrade from Steeler linebackers of the past.

Pittsburgh brought in Mike Mitchell to replace the ancient Ryan Clark at safety and that is an upgrade. However, without pressure and creating havoc in the backfield from the Steelers linebackers, Polamalu, Mitchell, Taylor and fellow starting corner Cortez Allen can be exposed by good passing attacks.

The Browns feel they’ve upgraded the middle of their linebacking core with the addition of veteran Karlos Dansby. He’s more of a play-maker than D’Qwell Jackson was, but doesn’t have many years left. 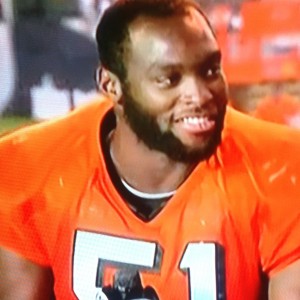 Last year’s number #1 pick Barkevious Mingo will be called upon to sack the quarterback. That’s why he was drafted. He’s very suspect against the run, so he has to make up for that with double-digit sacks this year.

Last year’s biggest disappointment was free agent linebacker Paul Kruger. He did not provide the pass rush that the Browns were expecting and needs to step his game up a lot or he’ll lose playing time to another guy that Jim O’Neil is hoping will get after the quarterback, Jabaal Sheard. The last starter right now is Craig Robertson on the inside, but for how long? He’s OK, but rookie third round pick Christian Kirksey was impressive in camp, in the preseason and is a better cover guy than Robertson, so don’t be surprised if the rookie from Iowa leap frogs Robertson and eventually becomes the starter.

Joe Haden is the best player on the Browns defense. When he’s at his best he can take away a quarter of the field and cover the opponent’s top receiver. It’s the other corner position the Browns were worried about so they passed on a much needed wide receiver at #4 and then at #8 in the draft, and selected defensive back Justin Gilbert to plug in opposite Haden. This has the potential to be an outstanding tandem even though Gilbert struggled at times in the preseason.  The Browns believe he has the size, speed and instincts to be a top flight cover corner. This also moves Buster Skrine inside to cover the slot guys and it will benefit the team immensely, as Skrine was often picked on last year by opposing quarterbacks on the outside and beaten badly or flagged for a penalty.

The strong safety position will be led by hard hitting veteran Donte Whitner. He was brought here in free agency to replace T.J. Ward because of his experience and leadership, as well as delivering the big hit to make receivers think twice about coming into his area. The Browns also feel Whitner is a good compliment to free safety Tashaun Gipson who led the team with 5 interceptions last year.

The Steelers front office feels the linebacking core will take major steps forward this year with Shazier using his speed to make tackles and Jones his pass rush ability to sack the quarterback, but I’m not as sold on this group, especially when you compare it to what they’ve had in the past.  Also the secondary has been a major problem for the Steelers for a number of years now and it’s just getting older. Yes the Steelers are using the same scheme, but do they have the players to make it work? Add in that Joe Haden is the best defensive player either of these two teams have, and the Browns have upgraded their talent and now have some depth, while it’s not a huge edge, I give the Browns linebackers and secondary the slight nod over the Steelers.