In reading Mike Pettine’s comments post-practice today, the two responses below caught my attention in a good way. It’s something the Browns have not been good at since they’ve returned to the NFL in 1999 and kudos to the first-year head coach for emphasizing it early in camp and I’m guessing he will continue to pound home the importance of winning the turnover battle and finishing games strong. 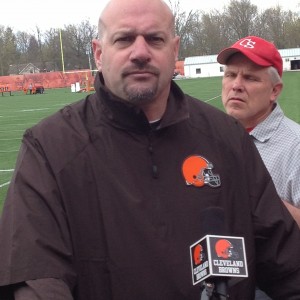 Question – On every running play ending with two or three defenders trying to pry the ball loose and if that’s planned?

Coach Pettine – “Absolutely. To me, you look at the statistics in the league – what’s the biggest indicator of wins and losses? It’s the turnover ratio. We want to be one of those teams that takes the ball away and doesn’t allow teams to take it away from us. I think as frustrating as it is for our running backs, it’s great practice for them having guys pulling at it and hacking at it, and it’s good for our guys defensively. It’s a habit like anything else. Hopefully, it will carry over to Sunday.”

Question – On if he feels like the defense really dominated today?

Coach Pettine – “To me, it’s just knee-jerk reaction, and then certainly, at the end, it was upper hand to the defense. I reminded them in the meetings that we’re going to do those competitions at the end, and this could have been the day where the offense dominated all day and the defense wins it at the end where it counted. We want to train our guys to know it doesn’t matter what happens over the course of a game, we’ve got to make sure we can finish, whether it’s in practice finishing a drill at the end when we start doing our two-minute stuff, our red zone stuff. I think that’s important to realize. If I’m with a group who’s played well throughout the game, it still comes down to playing well at the end in virtually every NFL game.”