MY 2014 BROWNS PROJECTED STARTERS FOR WEEK ONE

This is of course subject to change based on injury, practice and game performance, but this is how I see the 2014 Cleveland Browns lining up on Sunday, September 7th at Pittsburgh.

I’ve said it all along and I’m sticking to it, I believe it would be smart to start Brian Hoyer at quarterback for the first three games of the season if healthy, and see how he does. If he plays well and you’re winning you stick with him. If he struggles, or the offense struggles and you’re 1-2, or 0-3 after playing Pittsburgh, New Orleans and Baltimore then use the bye week in week #4, to reevaluate the QB position and decide if it’s time for Johnny Manziel to be your starter in game four at Tennessee. 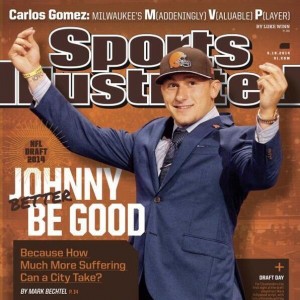 On defense I know that the Browns spent a lot of money in free agency on outside linebacker Paul Kruger last year, but he was a big disappointment. I believe there’s a great chance for second year linebacker and last year’s first round pick Barkevious Mingo to step up in camp and earn a starting job there. I also believe that this year’s first round pick, Justin Gilbert will beat out Buster Skrine for the right corner back spot and start from day one.

Here are my projected starters as of (7-26-14) for the Cleveland Browns:

6 Responses to MY 2014 BROWNS PROJECTED STARTERS FOR WEEK ONE