Cavs G.M. David Griffin told us he didn’t want to follow the trend in a copycat league. That he wanted to zig when everyone else zags in the NBA as he was searching for his next head coach. Griff did just that, surprising a lot of people and making NBA history in hiring David Blatt from Europe’s Maccabi Tel Aviv championship team. So trying to figure out which direction Griffin will go with the number #1 pick in Thursday’s NBA Draft could be just as tricky. 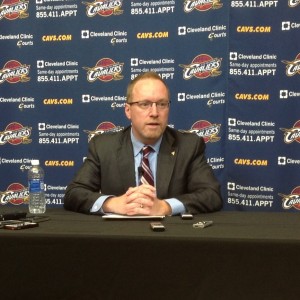 With Joel Embiid out now at least 4 to 6 months after having surgery, where he had two screws inserted into his fractured right foot, I think it’s safe to say that the Cavs, if they keep the number #1 pick, will choose between Andrew Wiggins and Jabari Parker. But which one is the big question?

Either player would be a welcomed addition at small forward for the Cavs, as they have yet to fill that position since LeBron James took his talents to South Beach in the summer of 2010.

So here’s my approach as I try and figure out the Cavs new general manager and whether he’ll pick Parker or Wiggins. If I learned anything from the hiring of David Blatt, it was to go back and listen to the answers that David Griffin shared with us at his first press conference when he was officially named the team’s full-time G.M. Griff said they wanted to be different and weren’t going to follow what a lot of other teams were doing as they looked for their next head coach. He also mentioned that he was an offensive minded guy.  Looking back on those responses now, it should have signaled to us all that the European version of Phil Jackson was going to be Griff’s choice, and soon the Cavaliers would be playing “BLATTsketball”.

With that in mind I went back and listened to that May 13th press conference again to see if there were any signs or clues given by Griff as to which way he would lean if he was picking between Parker or Wiggins. Here’s what I came up with.

Griffin, came right out and said “I believe in offense” and “I’ve had a primarily offensive based focus with the people that I was raised by”. Also, he said he wants the Cavaliers to be a better shooting team, a bigger team, a team that has a high basketball IQ and he’s looking for the right “Fit”.  I’ve also added in what I’ve heard about David Blatt’s coaching style and how his offense is all about spreading the floor. Then I factored in that the Cavs already have two ball dominate guards in Kyrie Irving and Dion Waiters. So they’re probably looking for someone who doesn’t always need the ball in his hands to be effective.

With all that information and based on the my scouting report of Wiggins and Parker, as well as other scouting reports I’ve read on the net, and people that I’ve talked to, it’s a very close call. But it sounds like to me that Jabari Parker would be the right “Fit Guy” for Griff and this Cavaliers roster.

Parker is more skilled offensively. He shoots the ball better than Wiggins. Has a better handle than Wiggins.  Parker is said to have a very high basketball IQ and he’s ready to play right now. He’s a “Plug and Play” guy at small forward from day one. The right “Fit”!

I hope I’m wrong in my assessment based on David Griffin’s comments because I think Andrew Wiggins has the potential to be the better player based on his ability to play both ends of the floor as well as he freakish athleticism. Wiggins would be my choice as the number #1 pick. But something tells me the player Griff is looking for in the draft. The player he was describing in that press conference, is Jabari Parker.

We’ll find out Thursday night if I read David Griffin right, or if he did one hell of a job zigging again, when I thought he was going to zag.