KYRIE IRVING ON THE CAVS UGLY WIN OVER PHILADELPHIA

A win is a win, and the Cavs will take it, but Kyrie Irving made no bones about it, this victory was just down right ugly. Here’s his postgame press conference following the 87-86 win over the 76ers 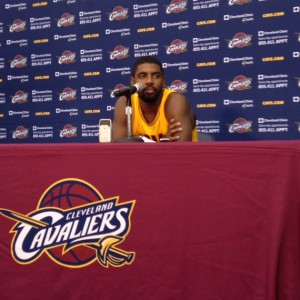 KEVIN LOVE ON HIS BACK INJURY vs 76ERS

Kevin Love explains how he hurt his back around the 7:00 mark of the 4th quarter of the Cavs 87-86 win over the 76ers and if he’ll be ready to play on Thursday night against Miami. 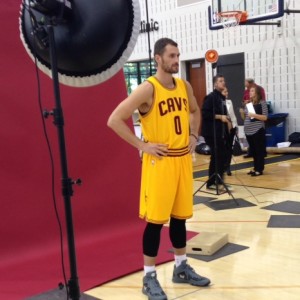 I caught up with actress and diehard Kentucky Wildcats fan Ashley Judd as she was leaving her seat to go congratulate the Kentucky players. Here’s her description of the Wildcats come-from-behind win over Notre Dame. 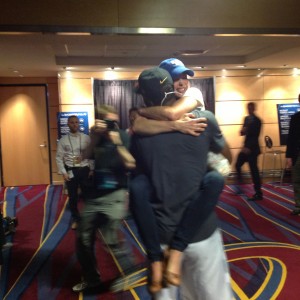 Wildcats point guard and Lima, Ohio’s Tyler Ulis tells me that the comments made by West Virginia freshman guard Daxter Miles Jr. definitely fired up the Kentucky players and they came out and played if not their best defensive game of the season, one of their top three in the Cats 78-39 win over the Mountaineers in the “Sweet Sixteen” in Cleveland. 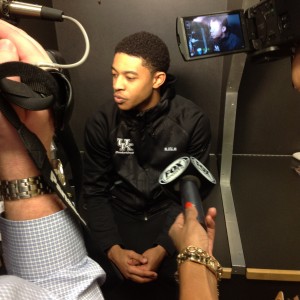 PODCAST – MY THOUGHTS ON MANZIEL IN REHAB, CAVS ROLLING AND TRIBE ON COVER OF SI

Here’s the opening monologue from the Kenny Roda Show on 1480 WHBC from Tuesday, March 24, 2015 on the Browns QB woes with Johnny Manziel still in rehab, the Cavs rolling towards the playoffs and screw the Sports Illustrated jinx. I love that the Indians are on the cover of SI’s 2015 MLB preview edition! 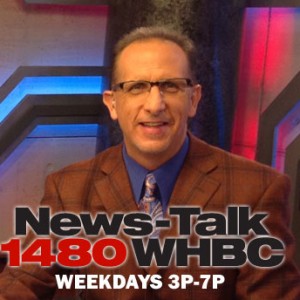 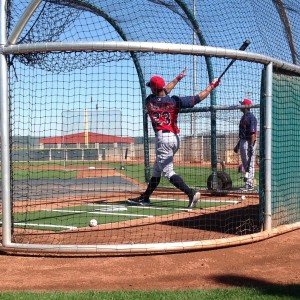 Veteran has compiled more than 7,000 yards over 8 seasons

Bowe, 30, comes to Cleveland after eight seasons with the Kansas City Chiefs, where he ranks among the franchise’s best in numerous receiving categories.

“Dwayne is a player that adds a big, tough and physical presence to our group,” Farmer said. “His ability to play in high traffic areas of the field for contested catches is something we really like. We have talked about having a versatile group of wide receivers that can align and play from various positions, and he can do that. His position versatility to inside and outside numbers appeals to us in a variety of ways. We look forward to seeing how he will help our team.”

Bowe’s 532 career receptions rank second in Chiefs’ franchise history (first among wide receivers) and his 7,155 yards rank third. Of his 532 catches, 100 have gone for 20 or more yards, a total that also ranks second all-time in Kansas City. His 44 career touchdowns rank fifth.

“The Browns were the perfect situation from the fan base to the style of offense and the way I’ll be utilized to help the team go to the next level,” Bowe said. “After eight years, you’re a pro’s pro. I’ve had every style of coaching, every personality. I’ve been through a lot and it’s going to make this transition a little easier because of what I’ve been through. The fan base is crazy just like Kansas City and is something I’m excited to be a part of. The positive energy I’m going to bring to the locker room is definitely going to take the Dawg Pound to the next level.”

Bowe said new Browns offensive coordinator John DeFilippo’s plans for him in the passing game also excited him about his move to Cleveland.

“That’s something I wanted to be a part of, getting more opportunities and being able to showcase my talent,” Bowe said. “The way he brings the energy and that positive excitement is another reason why I made my decision to be here.”

Bowe, a 6-foot-2, 222-pound Miami native who starred at LSU and was the Chiefs’ first-round pick (23rd overall) in the 2007 draft, made an immediate impact as a rookie (70 receptions, 995 yards, five touchdowns). He followed with his first of three 1,000-yard seasons when he compiled a career-high and Chiefs franchise record 86 receptions for 1,022 yards and seven touchdowns in 2008.

Over the past three seasons, Bowe has accumulated no fewer than 57 receptions and combined for 2,228 yards and eight touchdowns.

“Dwayne brings a nice combination of size and speed to our wide receiver group,” Browns coach Mike Pettine said. “He is a veteran player that has been productive and caught a ton of footballs in this league. His size and catch radius make him very quarterback-friendly, and we are happy to add him to our team.”

Bowe is the second new addition to the Browns’ wide receiving corps this month, as he joins recently signed veteran Brian Hartline. Together, they bring more than 200 games of experience and a combined 11,398 yards to a Cleveland group that returns last year’s leading receiver, Andrew Hawkins.

“These guys just want to play football. You don’t have any ego guys on that team,” Bowe said. “You’ve got guys that just want to come in and do their job and make the organization successful, and that’s all you ask for in a group, guys that want to come in and play their tail off. It doesn’t matter if they’re No. 1 or No. 2 as long as everyone is contributing. They just want to win. That’s something the organization definitely needs now is winning, and they’re putting in the right pieces to make that happen.”

Here is my opening segment from yesterday’s Kenny Roda Show  on 1480 whbc on the Cavs loss to Miami, Kevin Love’s injury status, March Madness and much more.