Cleveland Cavaliers –  With LeBron James returning home, the Cavs are by far the biggest winners this off- season. James is the best player in the world and he fills a major void at the small forward spot that’s been vacant since well, when he left four years ago. Forget that he signed a 1 year and an option year contract. James did that so he can cash in on the next TV contract by increasing his max contract dollars. He’s not going anywhere, considering how much money he can make, a young talented roster and he and his family are back home. First year G.M. David Griffin also locked up 2-time All-Star Kyrie Irving to a 5-year max contract and thus has his Batman and Robin for years to come. 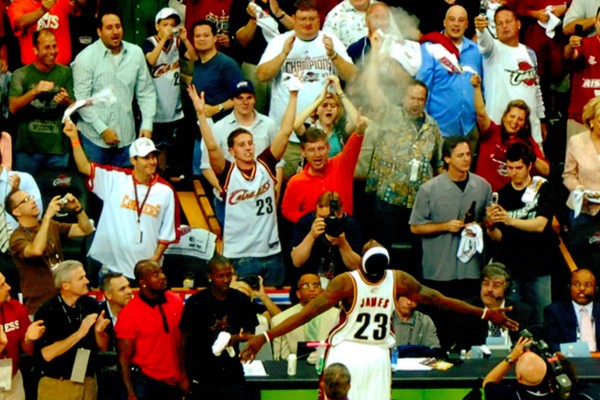 San Antonio Spurs – After Tim Duncan exercised his player option for $10.3 million to return for at least one more season with the World Champs, the Spurs then went and resigned two of their own free agents in Boris Diaw and Patty Mills to team friendly contracts thanks to Duncan taking less than market value. Plus San Antonio announced that head coach Gregg Popovich agreed to a multi-year contract extension. All four moves are big wins for the Spurs.

Los Angeles Clippers – Doc Rivers added two players that will help the team’s depth and offense and he did so without overpaying for either one. Getting Spencer Hawes, a stretch-5 for less than $6 million per season for four years and point guard Jordan Farmar to replace Darren Collison who left for the Kings at about $2 million per year are very good gets.

Miami Heat – Like the Cavs did in 2010, Pat Riley and the Heat felt LeBron’s return was a slam dunk only to be rejected and left shaking their heads. Again no matter what you do, as the Cavaliers found out, there’s no replacing LeBron James. The Heat overpaid Chris Bosh to stay instead of going to Houston. They’re going to overpay an aging Dwyane Wade and two of their other free agent signees are injuries waiting to happen in Danny Granger and Luol Deng.

Los Angeles Lakers – G.M. Mitch Kupchick was shooting for LeBron James and Carmelo Anthony. When LeBron went to Cleveland he was hoping to team up Carmelo with Kobe and Pau Gasol. Then Carmelo agreed to stay with the Knicks and Gasol left for the Bulls. Plus the “Lake Show” lost Jodi Meeks to OKC. This off-season has been one of the worst in Lakers history.

Houston Rockets – While they’ll still be a good team, the Rockets were trying to bolster their roster so they would become an elite team. They targeted Carmelo Anthony first and lost out. Then they set their sights on Chris Bosh and lost him too. Adding insult to injury, one of their fine young players, Chandler Parsons accepted an offer sheet from Dallas and Houston decided not to match it. So the high flying, long distance shooter is now a Mav. They replaced Parsons with Trevor Ariza which isn’t terrible and are said to be interested now in trying to land Kevin Love in a trade, but so far this off season Houston has had a problem getting the players they wanted.