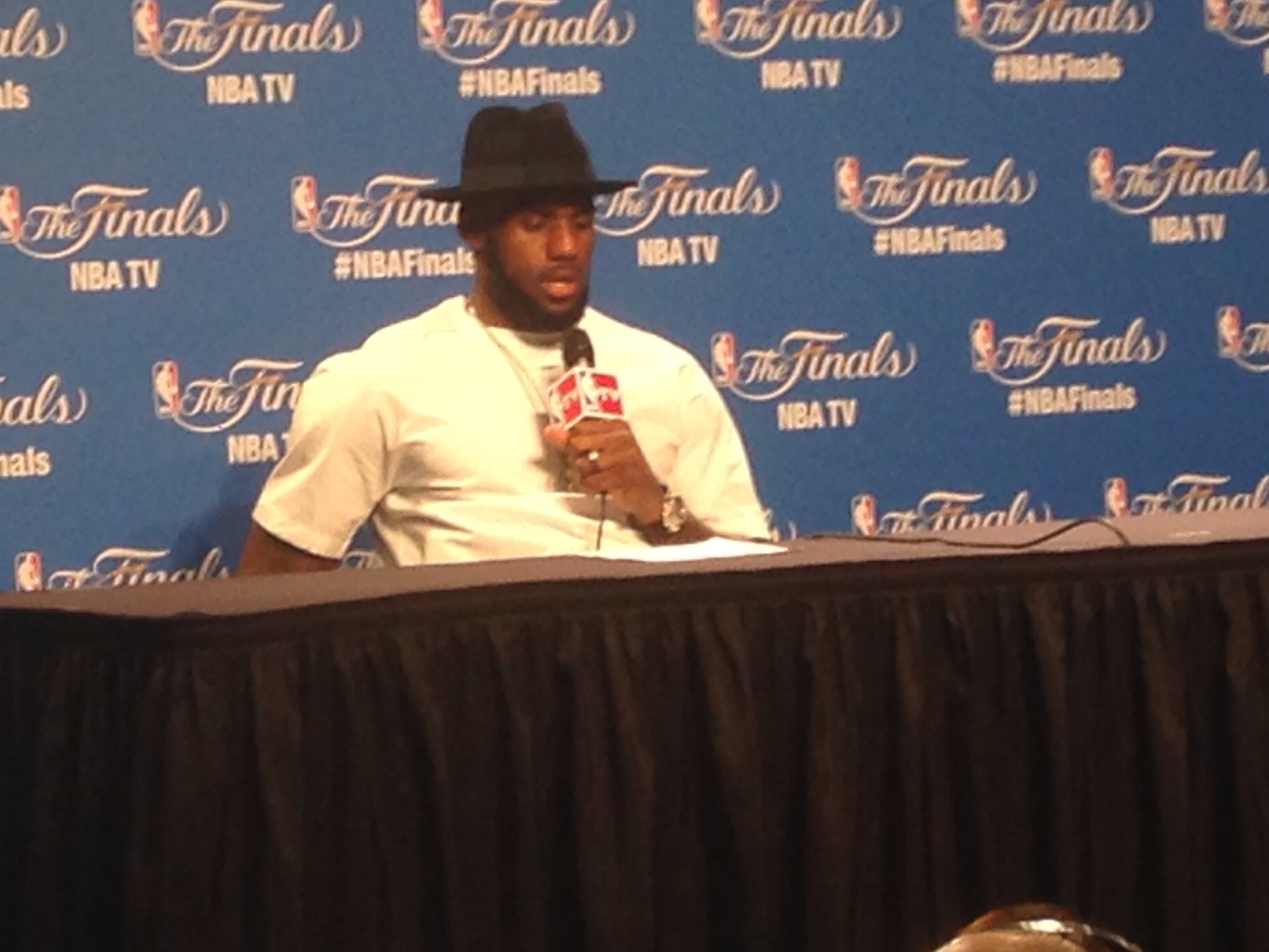 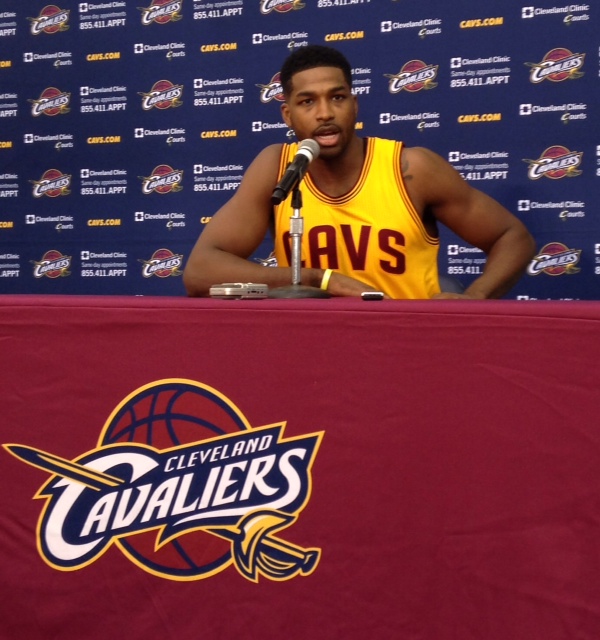 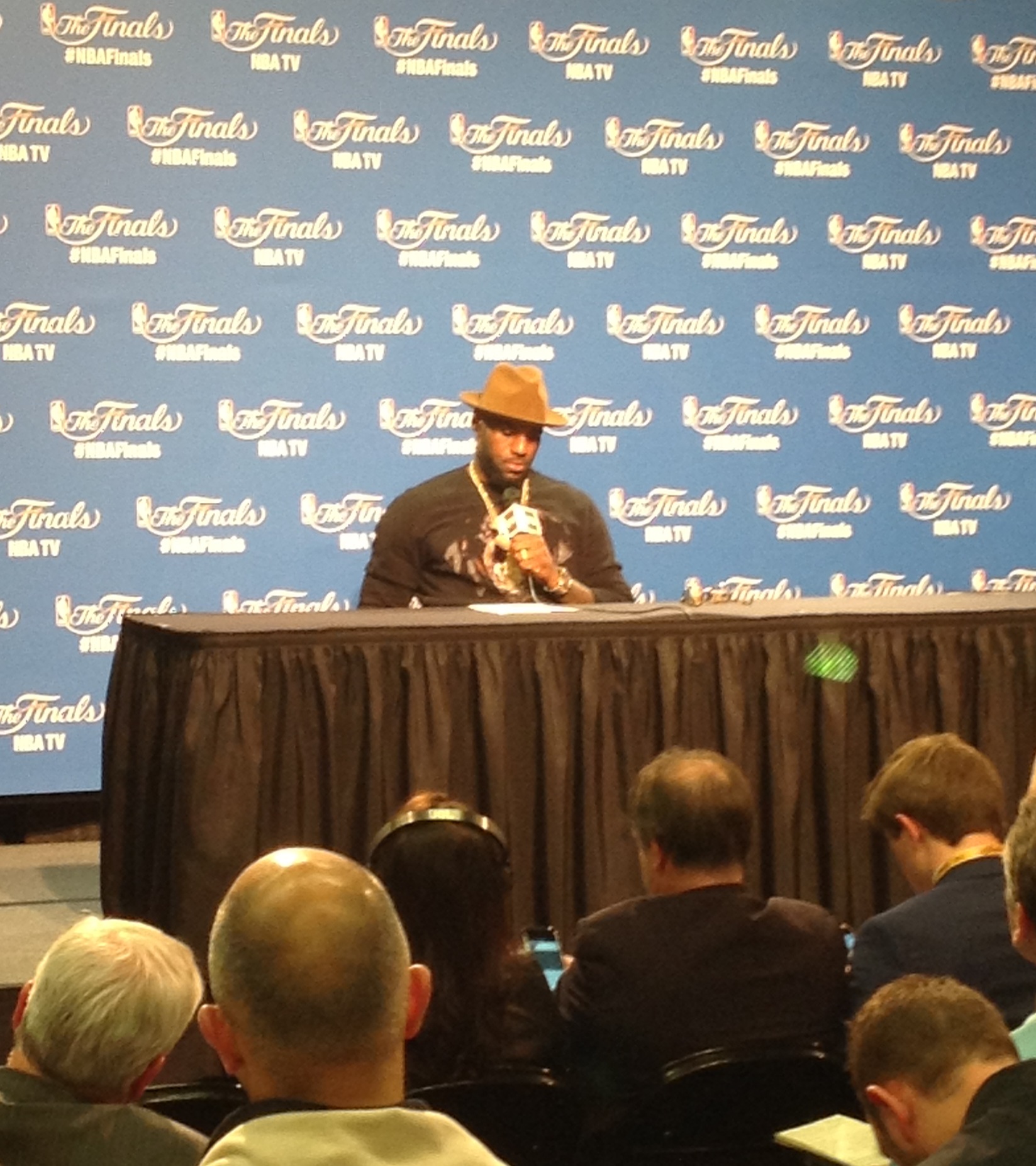 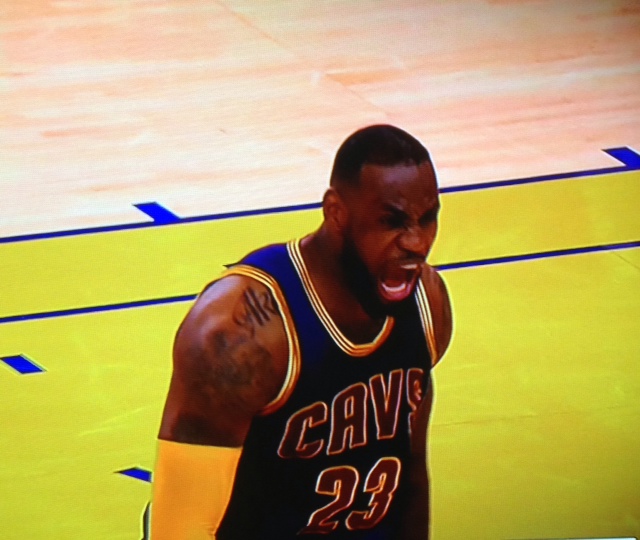 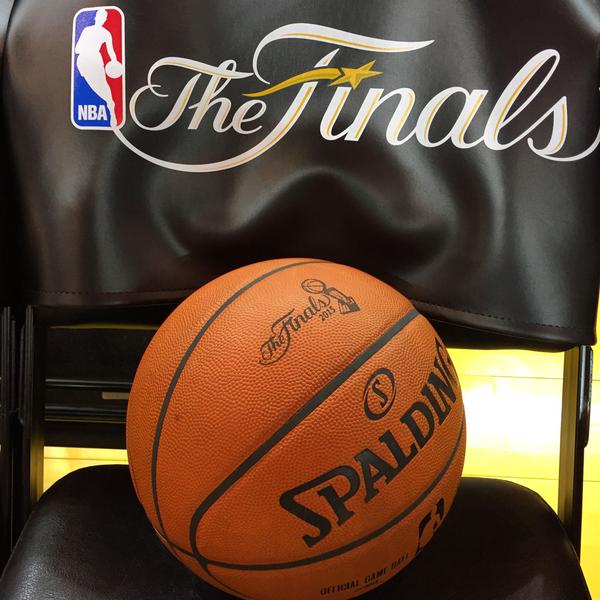 CAVS IN 3-D – Both of these teams rely on the three-pointer in a big way, Golden State more so than the Cavs, as they were second in the league in threes made with 883 (Cavs were fourth – 826). So David Blatt’s squad will have to defend the arc better than they have defended it all season long. They did a nice job against Kyle Korver and the Hawks, but are going to have to do an even better job against the “Splash Brothers” if they want to win this series and bring home the Larry O’Brien trophy for the first time in franchise history. One of the keys to that will be fighting over top of picks and not going under them. Iman shumpert, J.R. Smith, Delly and LeBron can’t get lazy and go under the many ball screens the Warriors will set or Steph Curry and Klay Thompson will make them pay. Communication on defense will be the key, along with quick switches and fast recovery and also don’t let Curry shoot from the left corner as he’s making 90 percent of his threes from there.

BANG THE BOARDS – The Cavaliers are undefeated this postseason when they win the rebounding battle and with the size advantage they have with their “BIGS” they need to control the boards in this series. The Cavs have to limit Golden State to “One and Done” at the offensive end so they don’t get many second chance opportunities where they automatically kick it out for a wide open three. Tristan Thompson, Timofey Mozgov and LeBron James will be the keys in making sure that doesn’t happen by wiping the glass clean. At the other end Thompson will need to continue to do what he does best and that’s pound the offensive glass to get the Cavs those second chance ops, to get as many extra possessions for “The King” as possible.

PUMP YOU UP – Yep that’s right it’s time for the Cavs to get “Physical” with a finesse team like Warriors. The Cavaliers need to flex their muscles early and often against a team, especially with their guards, that doesn’t like physical play. Steph Curry and Klay Thompson are both coming off injuries where they suffered blows to the head, so they may be even a little more fearful of physical play. As a team, the Cavs can’t worry about the “Splash Brothers” previous injuries and must bump, push, grind on those two players, within the rules, as much as possible, along with being physical with everyone else on Steve Kerr’s team.

DON’T GET SUCKED IN – Golden State is going to try and turn this series into a track meet. They want to control the pace and the tempo. The Cavaliers may be tempted to try and run with the Warriors, but that’s not a good idea. With the Warriors ball movement, three point shots in transition and depth, the Cavs may be able to hang with them for a quarter here and there, but not over six or seven games. The Cavs have to pick their spots on when to run, but will benefit more if this becomes a physical, half court series.

KYRIE FOR HOW LONG? – We know Kyrie Irving is going to play in Game #1, but how effective will he be and will he be able to play in every game in this series? The shorter the series, the better the chances are for Cleveland and K.I. to win. If Kyrie can give the Cavs 30-15-6 in every game in these NBA Finals, the Cavaliers chances of winning their first ever NBA title increase dramatically. That would be 30 minutes a game, 15 points per game and 6 assists per game. Even if Irving can reach those numbers, J.R. Smith just like he was in the last series against Atlanta, will need to be the team’s second leading scorer at about 17 to 20 points per game, while Iman Shumpert needs to average about 13 to 15 a contest and play outstanding defense on top of that.

CHAMPIONSHIP EXPERIENCE vs DEPTH  – There’s no question that Steve Kerr has a healthier and deeper team one through ten. So how does David Blatt counter that?  Blatt has to hope that LeBron (and we’ll get to him later) has a huge series, but also the “Championship Pedigree” of other players on the Cavs roster will come into play, and maybe even come in and play! Besides LBJ, the Cavaliers have five other players who have won at least one NBA Championship. So the likes of James Jones, Shawn Marion, Kendrick Perkins, Mike Miller and Brendan Haywood will have to contribute with either words of wisdom from their past “Finals” experience, or actually come in at some point in this series, and contribute on the floor in whatever role is necessary. The Cavs must use this “Championship” experience to their advantage to help offset the Warriors overall team depth. By the way, Golden State has zero NBA Finals experience. Not a single player on their team has ever played in an NBA Finals game. Steve Kerr their coach has, but he won’t be suiting up for a single game.

TO’S –  I’m not talking about time outs here. David Blatt has already learned his lesson about those. I’m talking about turnovers. When the Warriors don’t play well, they are very loose with the ball and tend to throw it away in bunches. When that happens, the Cavaliers need to capitalize on it and score points off of those Golden State turnovers. On the flipside, LeBron James especially, since he handles the ball more than any player on either team, needs to value the ball and not get caught in the air trying to make passes. He’s had a tendency to do that this postseason and has coughed it up quite a bit. The Warriors defense feasts on turnovers like that and they will make you pay and turn them into easy points.

SHOT TIME – This sounds so simple and so obvious, but it may end up being the most important key in this series – MAKE SHOTS! LeBron has always said, “The NBA is a shot making league” and he’s right. Throughout every game you’re going to get open looks at the basket, be it from distance, midrange or in the paint, and when you get those wide open looks, can you knock them down? If you do, your team will win. If you don’t, your team will lose. Simple, but so true, and especially in games of this magnitude.

LeDOMINATE – LeBron James was three assists shy of averaging a triple/double in the Eastern Conference Finals against Atlanta. He almost went 30p-10r-10a against the second best team in the NBA’s regular season. With everything the Cavs have gone through, from losing Kevin Love to injury in the first round of the playoffs, J.R. Smith being suspended for the first two games of the Bulls series, Kyrie Irving trying to play through major foot and knee injuries, Iman Shumpert gutting it out through a groin strain, “The King” has had to take his game to another level, and he has. Question is, can he elevate it even higher? Right now a lot of people, including James himself, feel he’s playing the most complete basketball of his career when you combine on court production, leadership, basketball IQ and preparation. He’ll need to continue to do that and maybe then some to help the wounded Cavaliers to their first ever NBA Title. Remember this, in his only game against Golden State this year LBJ put up the following stat line: 42p-11r-5a in the Cavs 110-99 home win. Golden State had “NO” answer for him! More of the same, or close to it, and Cleveland will be celebrating its first “World Championship” in 51 years.

I don’t expect the Cavaliers to accomplish every one of my keys in every game in this series. I do however expect them to control most of them and that’s why I like the Cavaliers in 6 games.  I believe they will split the first two games at Golden State and then hold serve at The Q to win it on their home floor. I can see why a lot of people would pick Golden State: best record, home court and the “Splash Brothers”, but maybe I’m still caught up in what the Ohio State Buckeyes were able to overcome to win a National Championship when everybody doubted them and feel the Cavs can do the same thing because they have LeBron James and he is playing the best all-around basketball he’s ever played. If he stays healthy in this series, I like “The King” and the Cavaliers to be crowned NBA Champions for the first time in franchise history. 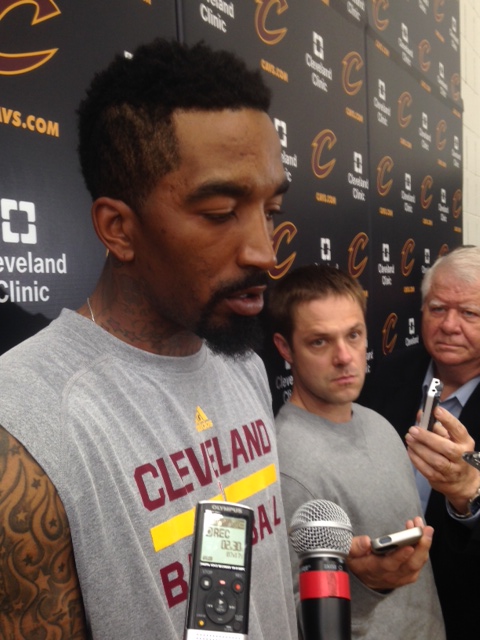 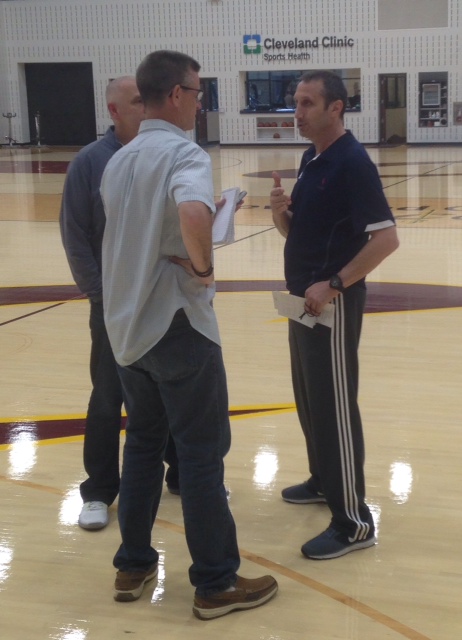 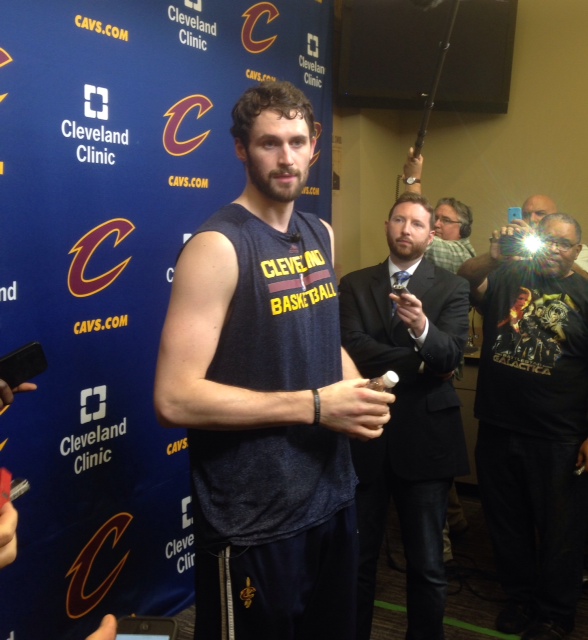 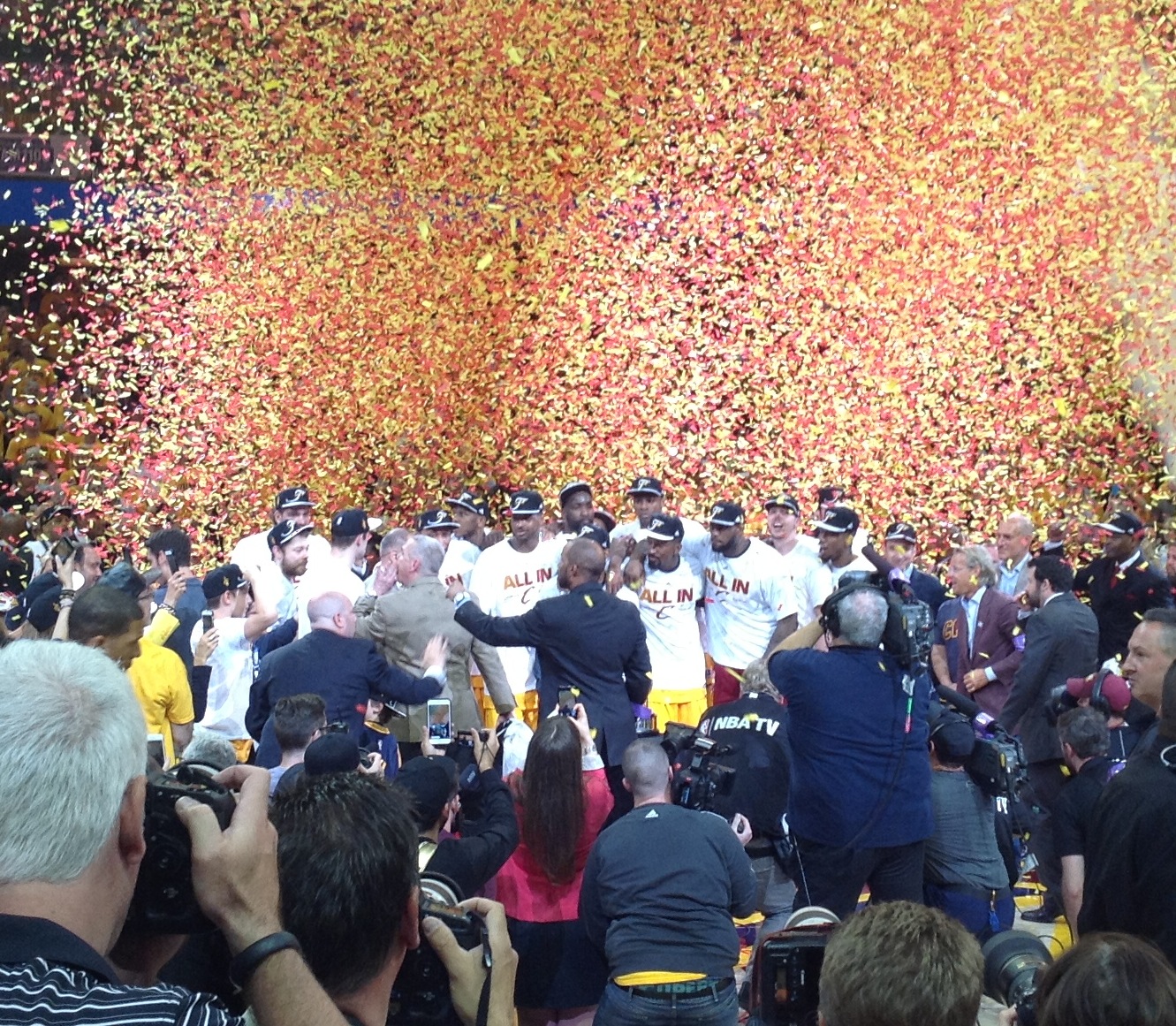