1) PROTECT THE PIGSKIN – Oregon has a bend but don’t break defense. They’ll

give up yards between the 20’s and maybe a couple of TD’s, but they also create

a lot of turnovers by stripping the ball or picking off a pass or two.  They are

a plus 20 in the giveaway/take away category, so  Cardale Jones and Ezekiel

Elliott who will handle the ball a lot on Monday night, need to take extra

special care of the football in this game, as both had turnovers in the win over

Alabama. Luckily the Buckeyes were able to overcome those mistakes in the Sugar

Bowl, but do that against the Ducks and you’re in trouble. Oregon’s offense

thrives on scoring, getting a turnover from their “D”, getting the ball back

quickly to get into a rhythm so they can score again and play from ahead.  For

Zeke it’s tuck it high and tight. For Cardale it’s protect it on runs and in the

pocket and throw it away if necessary. All of the other Buckeye weapons must be

aware of this as well. Don’t give the Ducks a short field. 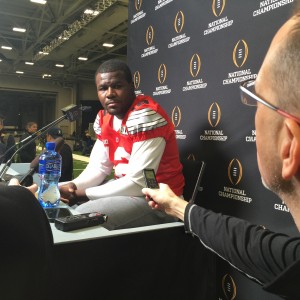 2) PRESSURE MARIOTA – I know he’s only thrown three picks all year, but he threw

one last week against F.S.U. Why? The Seminoles kept him in the pocket and

wanted to. That’s what the Buckeyes defense line needs to do as well. You’d love

to get sacks of course, but if not, then Joey Bosa, Adolphus Washington, Michael

Bennett and Steve Miller need to control the line of scrimmage, contain the edge

so Mariota can’t roll out and throw as much as he likes to. Continually get in his face and

then when you get a chance, like the 2002 Buckeyes did to Miami’s Ken Dorsey,

hit him hard and hit him often. Make him pay the price for some throws so he’s

his receivers. In a heavyweight title fight like this, body blows will add up in 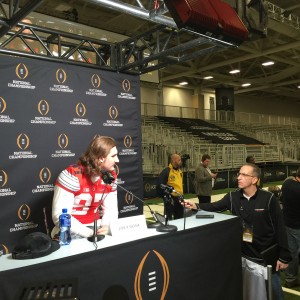 disrupt their rhythm is by keeping the ball away from them. So Ohio State’s best

defense against Oregon may be their offense. In the Ducks four losses over the

last three years with Mariota at QB, they lost the “Time Of Possession” battle

teams did so by running the ball, controlling the clock and keeping the high

flying Ducks grounded on the sidelines. The Wildcats and Cardinal as a team

rushed for over 200 yards in all four of those games.  Enter Ezekiel Elliott, he

State. Zeke needs to again have a big game on the ground to chew up that clock

and also help set up the play action passing game for Cardale Jones. A third

Buckeyes will be National Champs. 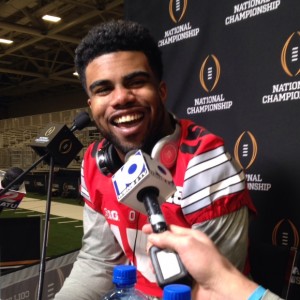 field goals. O.S.U. was  able to overcome that then, but they can ill afford to do that

against a potent Oregon offense. The Ducks are averaging 47 points a game, so

when you get in the redone against them you have to score 7. If Oregon holds you

to 3, they look at that as like creating a turnover because they feel their

offense will come down and put up 7 on you. 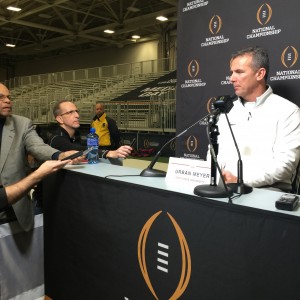 5) DUCK WRAP – Oregon is going to score some points against the Buckeyes. You

have to accept that. They’re that good. But you have to make them earn it. Don’t

give up the big play. In order to do that you must be fundamentally sound in

your tackling technique. You must hold up, wrap up and tackle the ball carrier

at first contact. Don’t go for the highlight hit, instead just do your job, be

where you’re supposed to be and make the tackle.